Two significant verdicts awarded within months of one another by juries in the same courthouse in St. Louis, Missouri have raised awareness recently about the potential for talcum powder products to cause cancer in women. If you or a loved one has developed ovarian cancer or another type of cancer, and you believe long-term exposure to talcum powder to be the cause, you may be entitled to financial compensation for your injuries, medical expenses, emotional trauma and other related damages. Contact a knowledgeable talcum powder cancer lawyer today to explore your possible compensation options.

Talcum powder products like Johnson & Johnson’s Baby Powder and Shower-to-Shower body powder are made from talc, a mineral composed mostly of the elements magnesium, oxygen and silicon. Because talc is effective at absorbing moisture and reducing friction, talcum powder is often used to prevent diaper rash in babies, and has been used by generations of women to stay fresh and prevent vaginal odors. Many women today regularly dust their underwear, sanitary napkins or genital area with talcum powder, unaware that the seemingly harmless practice may increase their risk of ovarian cancer and other cancers.

One of the recent talcum powder cancer verdicts – a whopping $72 million in compensatory and punitive damages – was awarded to the family of an Alabama woman who died from ovarian cancer after using Johnson & Johnson’s Baby Powder and Shower-to-Shower talcum powders for personal hygiene for more than 30 years. Internal documents presented at the trial indicated that Johnson & Johnson knew about the alleged link between talcum powder and ovarian cancer for years, yet withheld this information from consumers and the medical community.

The second talcum powder verdict included a $55 million award for a South Dakota woman who alleged that her use of Johnson & Johnson’s talcum powder for close to 40 years caused her to develop ovarian cancer. According to one of the jurors involved in the trial, internal memos indicating that J&J manipulated research and lied to the public about the dangers of talc “pretty much sealed my opinion.” As he told a St. Louis newspaper in the aftermath of the trial, “They tried to cover up and influence the boards that regulate cosmetics. They could have at least put a warning label on the box, but they didn’t. They did nothing.”

Although these talcum powder cancer verdicts are very recent, studies linking talc-based baby and body powders to a potential increased risk of ovarian, uterine and cervical cancer date back decades. The first study to warn that talcum powder may be dangerous was published in 1971, and in 1982, another study conducted by an epidemiologist at Brigham & Women’s Hospital in Boston indicated that talc particles from body powder products used for feminine hygiene purposes can get into a woman’s upper genital tract, possibly increasing their risk of ovarian cancer. In 2016, a talcum powder study published in the medical journal Epidemiology reported the ovarian cancer risk to be as high as 33%.

In the years since the first researchers highlighted the potential connection between talcum powder and ovarian cancer, more than a dozen epidemiological studies have reported that long-term use of talcum powder dusted on a woman’s groin area can increase their risk of ovarian cancer, with some putting the greater risk at 30% or more. If you believe you have been adversely affected by cancer side effects of talcum powder, consult an experienced product liability lawyer today to discuss your legal options. You may have grounds to file a talcum powder cancer lawsuit against Johnson & Johnson, in order to seek fair and timely reimbursement for your losses.

Women across the country are being warned that using talcum powder as part of their feminine hygiene routine may increase their risk of ovarian cancer, and in an editorial published last month in Time magazine, an associate professor of African and African Diaspora Studies at the University of Texas suggested that African American women may be at a greater risk than other women, due to strategic marketing campaigns by Johnson & Johnson and other corporations. If you have routinely used talcum powder on or around your genital area, and you have since been diagnosed with ovarian, uterine, or cervical cancer, you may be entitled to financial compensation for your injuries and medical bills.

Significant attention has been paid to the potential link between talc powder and ovarian cancer in recent months, as multi-million dollar verdicts have been awarded to plaintiffs in at least two talcum powder trials so far this year. In February, a St. Louis jury awarded $72 million in damages to the family of Jackie Fox, who died from ovarian cancer after using Johnson & Johnson’s talcum powder on her genital area to help control odor for more than 30 years. Fox was black, as are many of the women pursuing legal claims against Johnson & Johnson for its talc-based Baby Powder and Shower-to-Shower body powder products, and Omise’eke Natasha Tinsley, the author of the Time editorial, believes this is more than just a coincidence.

For centuries, African American women have been targeted by false, racially-motivated advertising campaigns, particularly those involving feminine odor, which Johnson & Johnson’s talcum powder was specifically marketed to address. In 1988, ad campaigns for J&J’s Shower-to-Shower body powder assured women that “just a sprinkle a day keeps odor away,” and reminded them that “your body perspires in more places than just under your arms.” As a result, generations of African American women have routinely used potentially harmful talcum powder products around their genital area to stay fresh, a practice that may put them at a greater risk of cancer in their reproductive organs.

Just last year, a study conducted by researchers at George Washington University reported that vaginal douching products were used twice as often by black women than they were by white women, and, in addition to the practice preventing the detection of vaginal infections, the researchers found that vaginal douching products often contain harmful chemicals known as phthalates, which have also been connected to an increased risk of cancer. The first studies linking talcum powder products to ovarian cancer were published in the 1970s and 80s, and internal memos and documents presented at recent talcum powder trials suggest that Johnson & Johnson knew about this risk for years, yet failed to warn consumers.

It’s true that the warning labels on J&J’s Baby Powder and Shower-to-Shower body powder products carry no mention of an increased risk of cancer, only that inhaling the powder, contact with their eyes and applying the powder to areas of broken skin should be avoided. As a result, J&J is being accused of failing to adequately warn consumers and the medical community about the alleged risk of cancer from talcum powder, and the pharmaceutical giant currently faces more than 1,000 product liability lawsuits filed on behalf of women across the country who have been diagnosed with ovarian cancer after using talcum powder for feminine hygiene purposes.

Following Jackie Fox’s verdict, another trial in the same St. Louis courthouse was decided in favor of the plaintiff, Gloria Ristesund, who was awarded $55 million for an ovarian cancer diagnosis allegedly caused by J&J’s talcum powder. A third talcum powder cancer trial is expected to begin in the coming weeks, involving a product liability claim filed by Tenesha Farrar, a 40-year-old African American woman diagnosed with stage 3 ovarian cancer allegedly caused by talc. If you believe you have been harmed by cancer side effects of talcum powder, contact a knowledgeable product liability lawyer today to discuss the possibility of filing a talcum powder cancer suit against Johnson & Johnson.

In 1988, advertising campaigns for Johnson & Johnson’s Shower-to-Shower body powder, specifically marketed as a feminine hygiene product, told women that “just a sprinkle a day keeps odor away,” and reminded them that “your body perspires in more places than just under your arms.” Today, many of these women are suing Johnson & Johnson for failing to warn them that this very same body powder, which contains a mineral called talc, can increase their risk of ovarian cancer by as much as 33%. One of these women is ovarian cancer survivor Deane Berg, who turned down a $1.3 million out-of-court settlement from Johnson & Johnson to blow the whistle on the company’s dangerous product, used by millions of women across the United States.

Talcum powder contains the mineral talc, which is composed of the elements oxygen, magnesium and silicon, and the powder is used by mothers, nannies and nurses across the country to prevent diaper rash, due to its ability to absorb moisture and keep the skin fresh and dry. For the same reasons, generations of women have used Johnson & Johnson’s talc-based Baby Powder and Shower-to-Shower body powders for feminine hygiene purposes, applying the products to their underwear, sanitary napkins, diaphragms or genital area to maintain freshness and prevent vaginal odors. In fact, J&J specifically targeted women in marketing materials for talcum powder, shaming them into using the products without warning them about the risks of perineal talc use.

According to a growing body of research, women who regularly dust their genital area with talcum powder products like Johnson & Johnson’s Baby Powder or Shower-to-Shower body powder may have a greater risk of developing ovarian cancer. In one study published in Cancer Prevention Research in June 2013, researchers linked genital use of talcum powder to a 20% to 30% greater risk of ovarian cancer, and more recently, a study published in the journal Epidemiology in 2016 warned that women who routinely applied talc-based powders to their genital area, underwear or feminine products faced a 33% higher risk of ovarian cancer. Deane Berg knows this risk all too well; she was diagnosed with stage 3 ovarian cancer in 2006, after using talcum powder for more than 30 years. 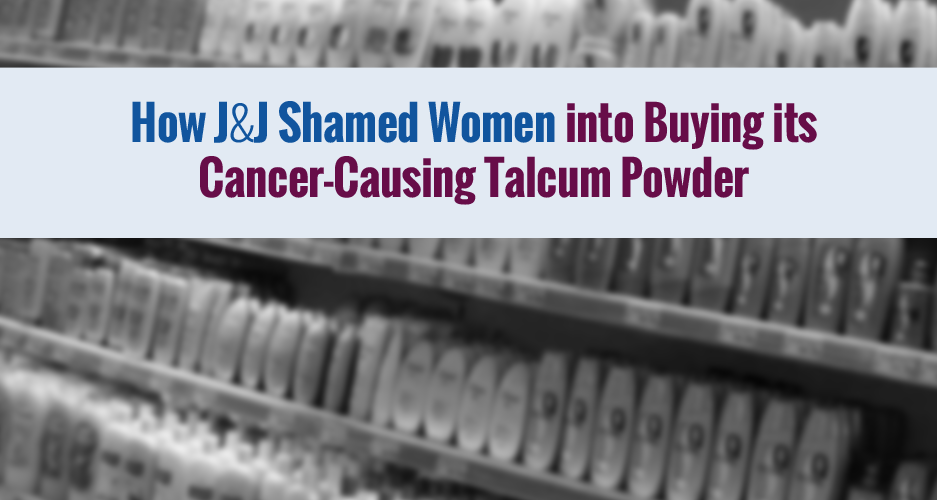 The sad truth is that Johnson & Johnson likely knew about the link between talcum powder and ovarian cancer decades ago, yet intentionally withheld this information from the public and continued to market its talc-based powders to women as feminine hygiene products. And while J&J’s baby powder labels do indicate that the product is meant for external use only, more than a dozen studies published in recent years have pointed out that talcum powder applied topically could travel through the vagina, into the uterus and along the fallopian tubes to the ovaries. Jurors appear to agree, and in two back-to-back landmark verdicts delivered within months of one another, talcum powder plaintiffs were awarded $72 million and $55 million in damages for their talcum-related cancer injuries.

Many women continue to use talcum powder for feminine hygiene today, because they were used for decades by their mothers and grandmothers. What many of these women don’t know, however, is that simply dusting their genital area with talcum powder each morning can put them at a greater risk for ovarian cancer and other types of cancer. If you have been diagnosed with ovarian cancer, and you believe Johnson & Johnson’s Baby Powder or Shower-to-Shower body powder to be the cause, contact an experienced product liability lawyer today to discuss the possibility of filing a talcum powder lawsuit against Johnson & Johnson.

Compensation may be available if you used talcum powder products that resulted in cancer. Complete the questionnaire below to see if you qualify.
__________________